Across the courtyard, mothers with small children and a few older men wait as the Medair medical team unloads boxes of medications and prepares to open today’s clinic in Sinjar, Iraq. Here, in a smaller room with a circle of plastic chairs, I watch as a group of young women shyly enter and find their seats; each carrying a small notebook. I’m slightly nervous; I have attended many clinics but today I am joining the psychological support group where people will be sharing their mental health struggles. My camera feels intrusive, and I am more conscious than ever that I am asking people to share their life’s details with a virtual stranger.

This is the fourth of nine weekly group sessions led by Psychosocial Support Officer (PSS) Hussein. As the group settles he explains that my job is to tell the story of mental health support in Iraq. All of the participants give permission for me to take photos and to share their personal stories.

Before the crisis of 2014, when armed groups swept across this area and many people were kidnapped or killed, this town was bustling with 35,000 people. Today about one-third of the families have returned; each one having their own story of loss, trauma, and fear, the effects of which linger even years later.

One of the exercises in today’s session is about community networking. A ball of string is passed from one person to the other, with each person holding on to part of the string and taking on the role of someone in the community. As the string builds a ‘web’, the group talks about how teachers, doctors, shopkeepers, and everyone else play a role in building a healthy community. 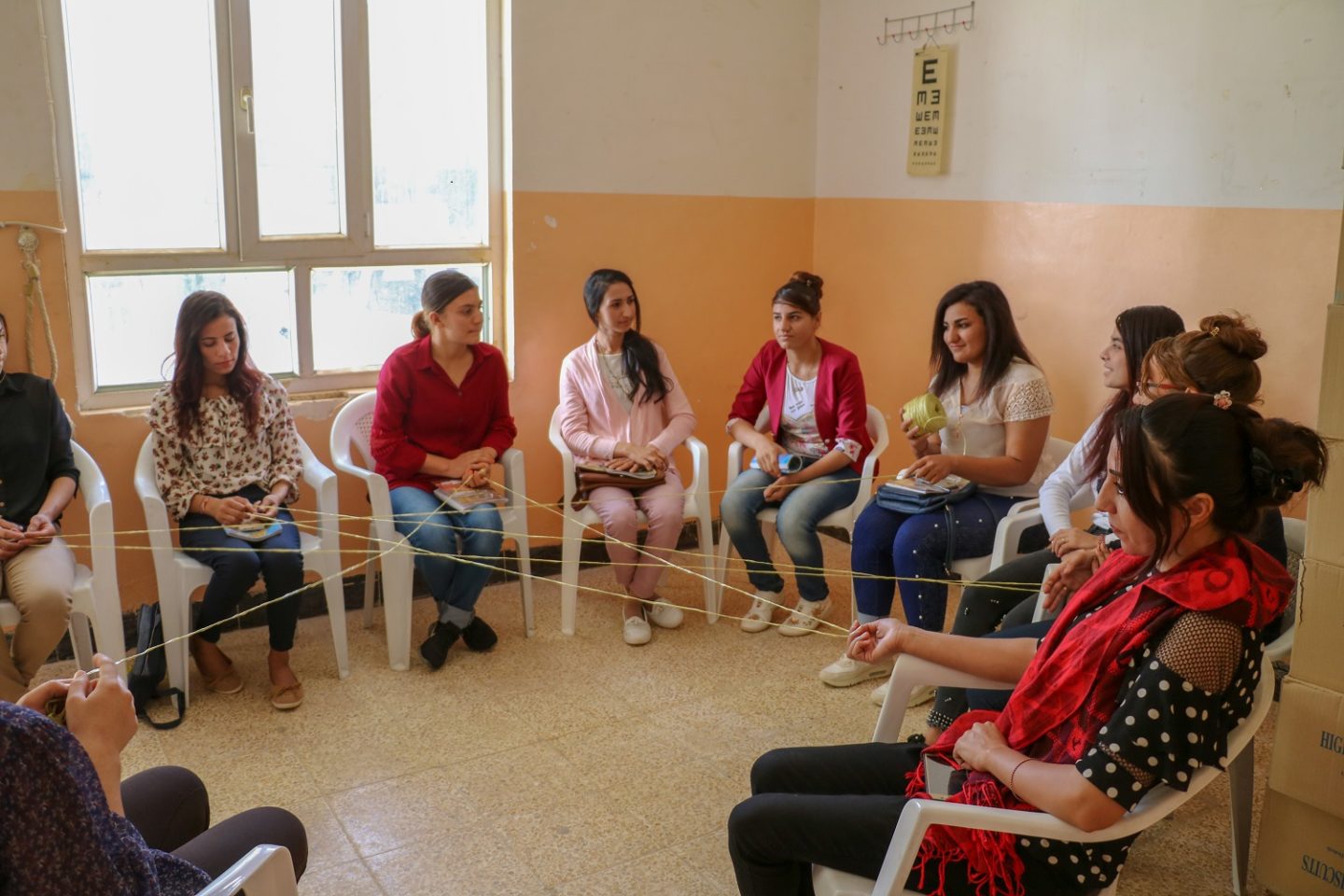 “Doing this in a group is so important,” explains Hussein. “When people learn how loss and trauma affects us, and how to support each other, they can identify when others may be experiencing depression or might have suicidal thoughts. We have had people come to the clinic after someone from the group told them about how we can help. It’s also important

that we are here alongside Medair’s health team. The doctors can identify the symptoms of depression or trauma and encourage their patients to talk to me.” 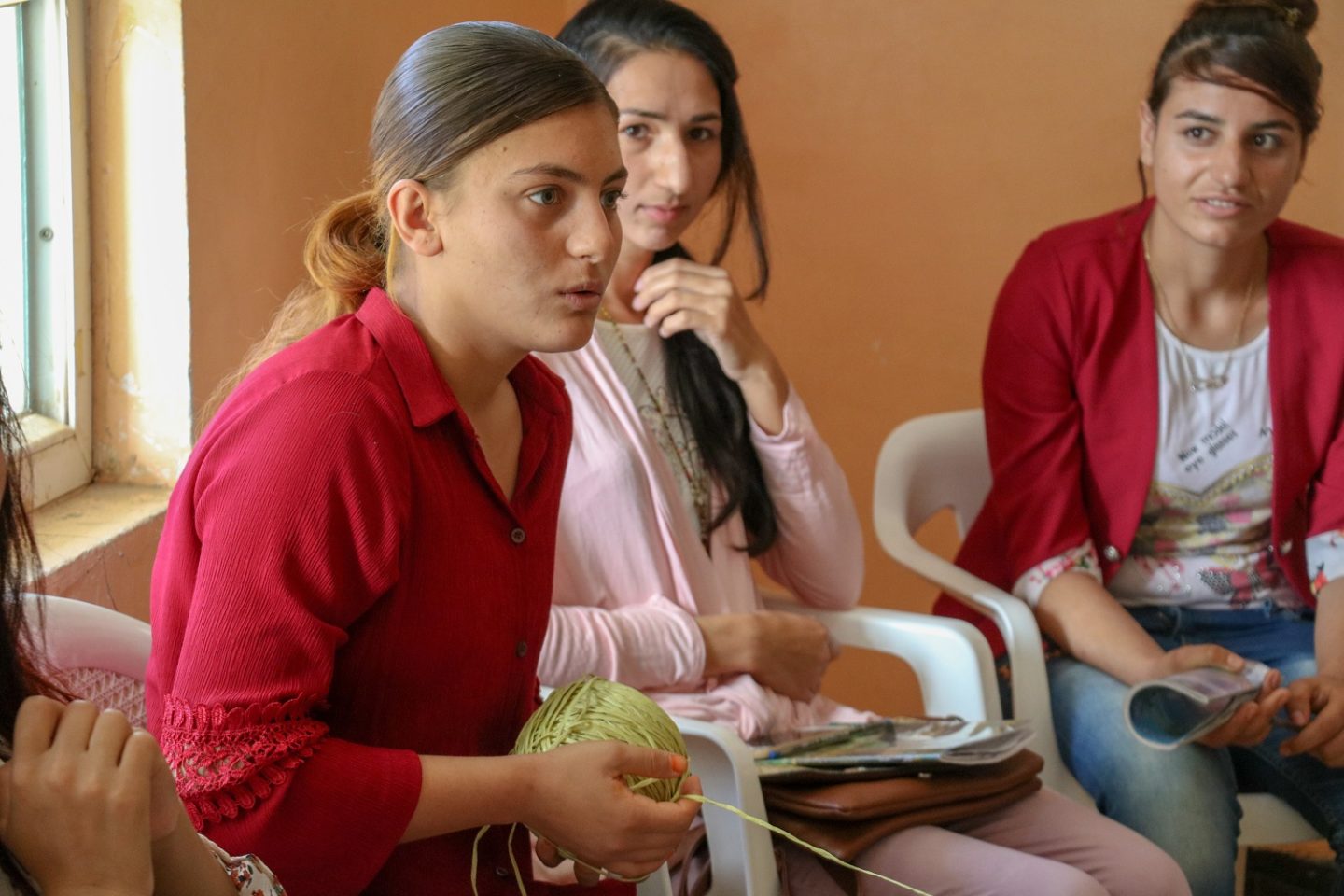 In addition to group sessions, Hussein offers people the opportunity for more support through individual sessions. Serious cases requiring psychiatric help are referred to hospitals in larger centres, and Hussein follows up with those patients.

Bushra, 19 years, says there are some people in the community who are skeptical about seeking help for mental health. “There is a stigma,” she says, “but we will break it. I am determined to get this training. You’ll see; the groups will get bigger. Even now more people are asking when the next ones will start.” 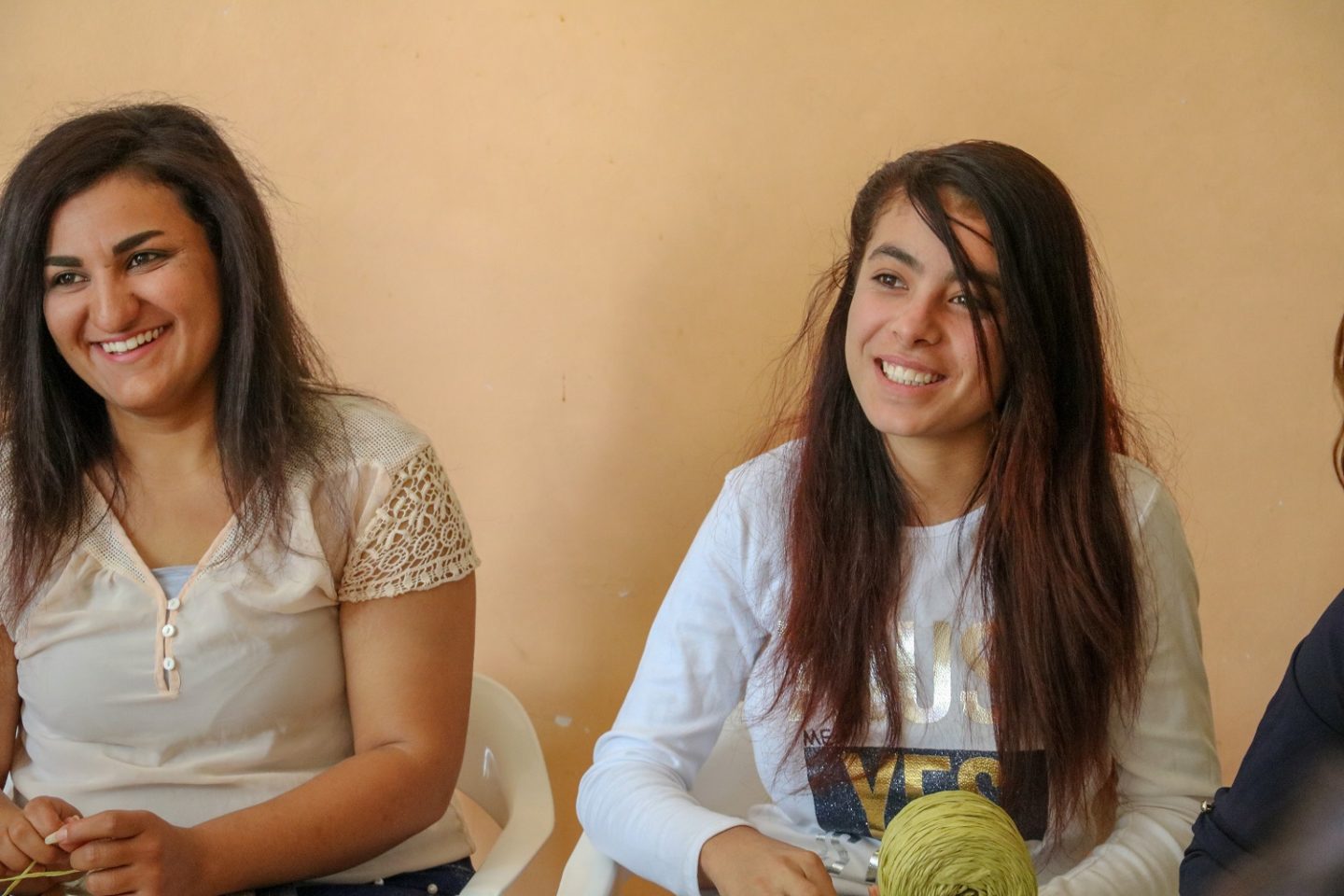 Her father died two years ago, and some of her family members were kidnapped in 2014. “With what I’ve learned I can help my mother,” says Bushra. “When she cries I can remind her of when we have come through difficult times, and I can remind her that other people have experienced loss too. We can talk about times where we have all looked after each other and assure her we will do this in the future too.”

As the session goes on, the group becomes more talkative; more comfortable with sharing their stories. I am impressed with how much they have learned in just a few weeks, and how eager they are for more. The discussion is not dwelling on the past, or on their own suffering and trauma. Each person here is focused on how to help their family and their community.

After the group disperses I sit in the garden making notes and checking my photographs. After a few moments a woman approaches me and begins to show me a gallery of photos on her phone. She is speaking to me in Kurdish, but I don’t understand. I find Salma, another of our Medair psychosocial support officers, who has been translating for me. My heart drops as Salma introduces me to Shary and explains that the photos are of family members who were kidnapped in 2014. In total 76 were taken, and 41 are still missing. 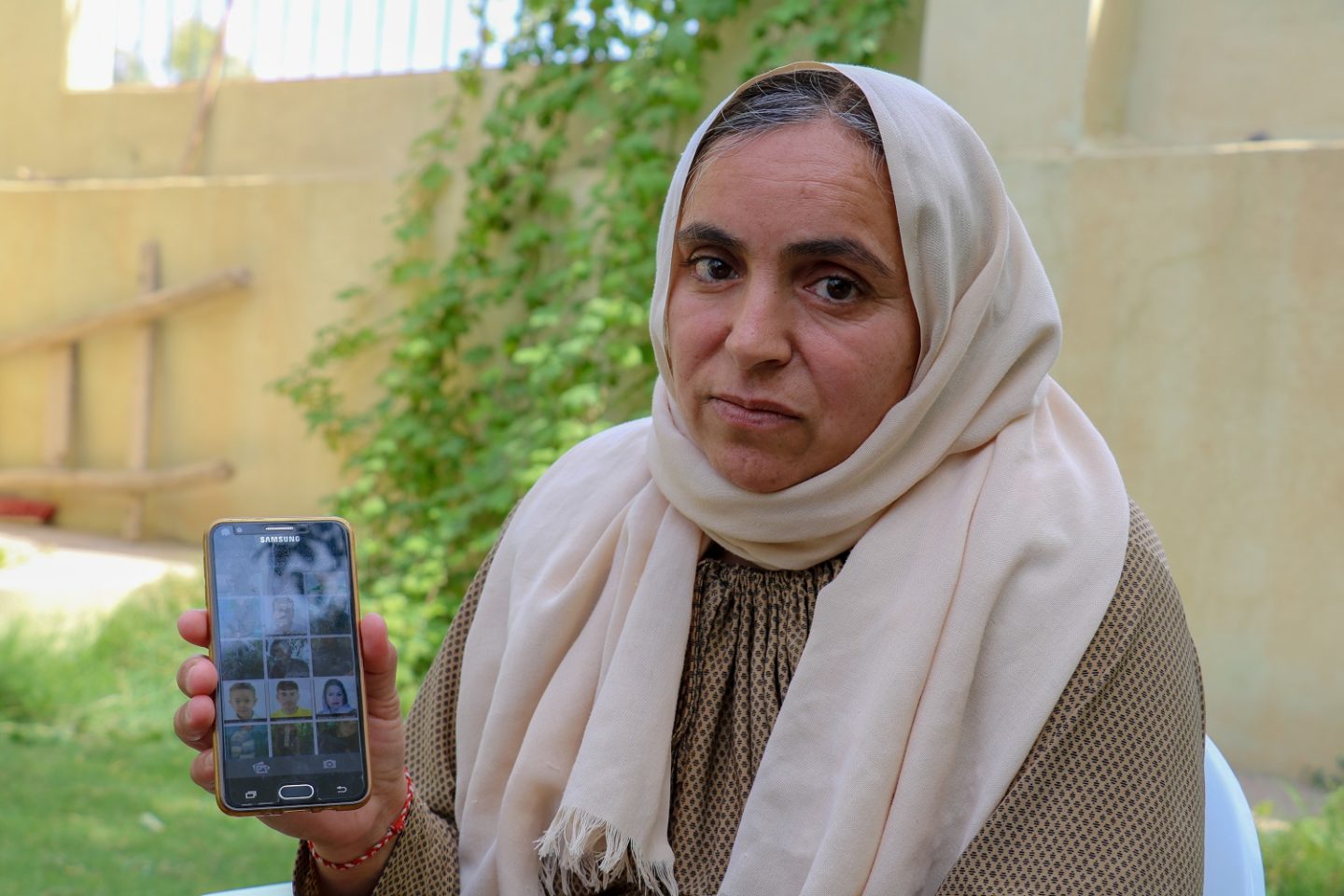 Hussein joins us and explains that Shary has attended the psychosocial support group and now comes for individual counselling. Her son Diar, 11 years, also sees Hussein for mental health support.

“It’s not just for me that I come here,” says Shary. “I also have to help my children. We have to help each other.”

Before the crisis, Shary and her two sisters had a well-known women’s salon; a busy place where all the women came for hair and makeup before a big party or celebration. They were close; always together. Two of her sisters were kidnapped; one was returned and has emigrated to Europe with the help of an NGO. The other is still missing.

Hussein is pleased to see how Shary has made progress. “She is such a strong woman. In the group she was very open about sharing her story to help others, and she supported the other group members. They learned a lot from her about how to cope with such sadness.”

“I didn’t have an appointment today,” says Shary, “but I wanted to get out of the house and be around people. I came here to the clinic just to see the staff. Everywhere here in this town there are memories. It helps to talk to Hussein and I’m learning how to cope with the loss and stress.”

As Shary talks with Hussein and Salma, sometimes a small smile crosses her face and it’s obvious that she is feeling better than when she arrived. 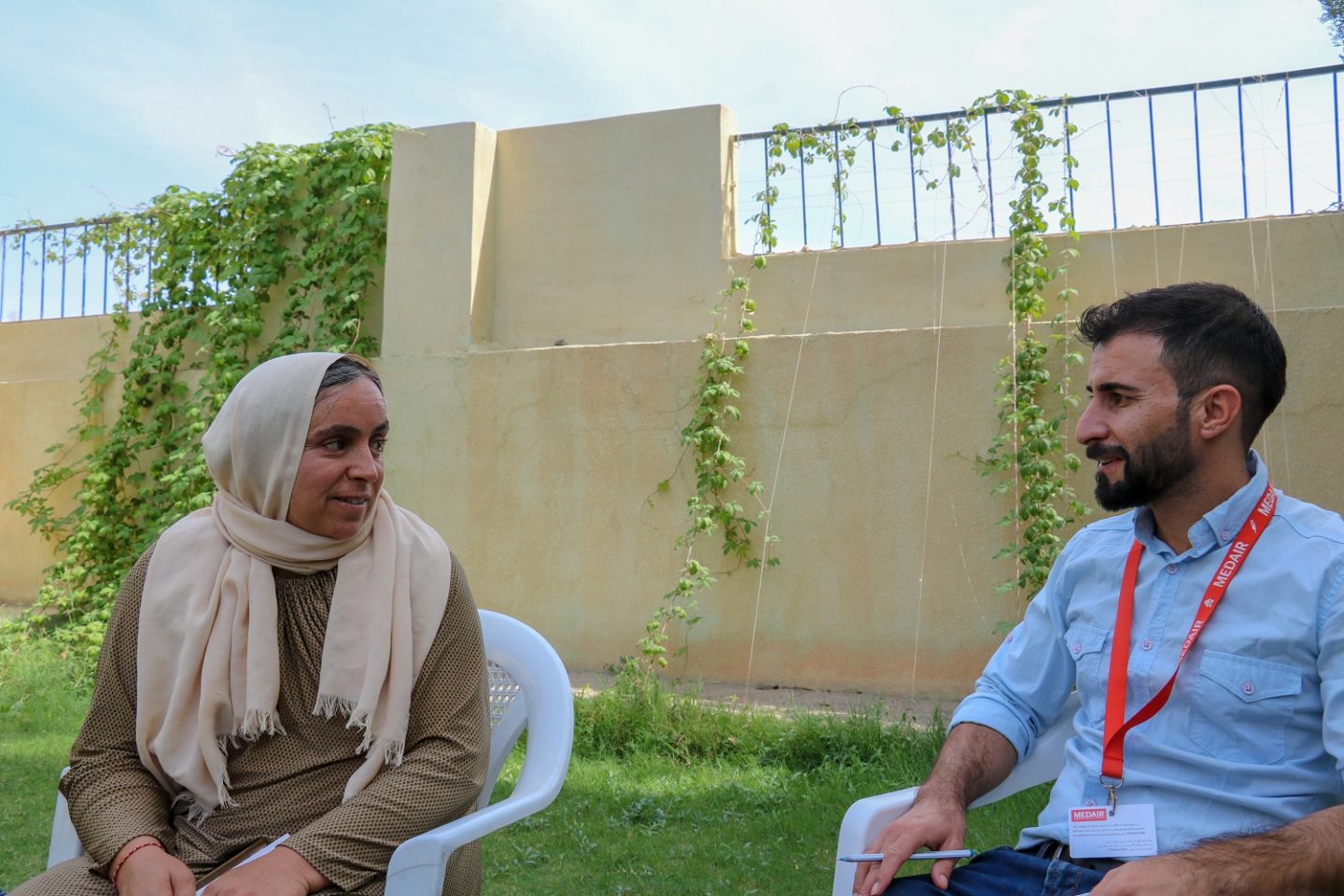 “This program you are offering is very important for us here,” she says. “People need support for what we have experienced; what we have all been through. It’s not easy, but day by day it can be better.”

As we pack up and leave the clinic for the day I reflect on my initial nervousness. I couldn’t have been more wrong. I marvel at the warmth and inclusiveness I felt offered to each person involved in the group; even a guest like myself. I can understand why this program is so powerful in bringing communities together and strengthening the mental health of people who have experienced trauma. Since then I have found myself thinking quite frequently of Bushra, Sharya, and the others I met. I don’t think about the things they have endured, I think about the hope they represent for their families and neighbours, and about the hope that this program brings where Medair is working throughout northern Iraq.

This content was produced with resources gathered by Medair field and headquarters staff. The views expressed herein are those solely of Medair and should not be taken, in any way, to reflect the official opinion of any other organisation.